Fifth Graders Affect Change One Drop at a Time 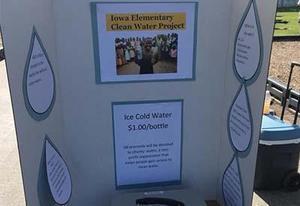 When fifth graders in Bryan Renschler’s class at Iowa Elementary read about the critical shortage of fresh water in many parts of the world, they were moved to take action. Thanks to a number of fundraising efforts last spring, they have assured that a village in India will now have access to clean water.

“It all started when our class read an article from a Scholastic magazine that I subscribed to,” Renschler said. “We read about a girl named Natalia who had to walk miles a day to get dirty water for her family.  Because of this, she was not able to attend school regularly, and people in her village were getting sick.”

The article went on to tell how an organization named charity: water paid for a well to be dug in Natalia’s village. That was a life-changer. Not only did the well improve her family’s health, but it also allowed her time to attend school. She was even elected president of the village’s water committee.

Renschler’s students were excited to learn that charity: water was a real organization and wanted to help. They brainstormed fundraising ideas, with a goal of raising $2,000. Through a combination of student donations, selling water bottles at recess, and donations through Facebook and from teachers, they were able to send in their contribution last spring. A few weeks ago, they received confirmation from charity: water that their gift of $2,055.27 would be used to support a community in India.

Renschler is open to a similar experience this year, and will let his students make decision on what and how to affect change in the community or abroad. “I want them to have a passion for it,” he said.